I am Bloktic, and this is my website. Feel free to look around!

What you can expect from this little place of mine:

Click here to look at other (and possibly better) Neocities sites.

Here is my guestbook. Feel free to sign it!

This is my button! Feel free to use it on your site, but just be sure to host it yourself!

A new comic page on a Tuesday? What has the world come to!?
If you've been following my comic for a while now, you probably know that I've been working on the same Jailbreak storyline for about 10 months now. A pretty long time for just one story! However, it is coming to an end soon, as I just released the penultimate page of the arc, and the final page being released on either Thursday or Friday!
After that, I will going on another family trip for about two weeks, and Clark-Gibson will be on hiatus. I think it'd be a good time for a small break. I might still post something special to hold you over.

I also plan on working more on that game I've been mentioning for a while now. If I get done with a certain milestone for that, I think I'll finally put out some previews for you guys!

Anyways, I hope you look for forward to the end of Clark-Gibson's longest storyline this week, and whatever else I have planned!

A beautiful May day today, the perfect time for an update.
To start, the main reason for this update is that I am going on a month-long trip to visit family! Of course, this means that Clark-Gibson is going on another semi-hiatus. I will probably make a comic or two during the next month at some point, which is why it's not a full hiatus. I'm also planning on working on that game I mentioned last time a little more. Progress has... uh... slowed down a bit on that, hehe.
For upcoming stuff, you may notice that this July is the 2-year anniversary of Clark-Gibson! I'll have something really cool planned for that, so stay tuned!
I'd like to give thanks to a friend of mine, CryptidGarden (WARNING: possible NSFW content), for making this wonderful humanized fanart of Cutlass! Full size image can be found here. 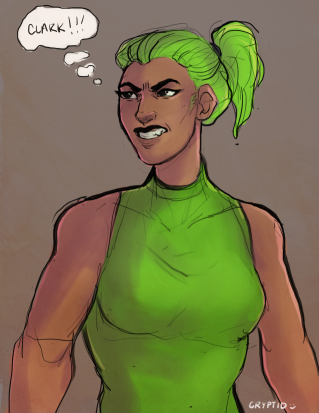 To end things off, I also got two new followers since the last update: mr-pibbs and pre-dead! Go check them out when you can!
Alright, that's all from me for now. Until next time!

Well we made it through another year. I think it's time for another update.
First off, I hope everyone is having a wonderful holiday season. Christmas for me was nice as usual: presents and eating big meals like always. The night of New Year's Eve always brings a nice cozy feeling too, so I'm looking forward to that.

As for actual news about my plans, I wanted to let people know that Clark-Gibson is going on a bit of a small hiatus. Probably 2, maybe just 1, week(s). Reason being is that I want to take some time to update other parts of the site, like the character cards and the Other section.
Also, I'm working on a new game! Not 100% sure if I'll finish it, but I've already made over 10 levels out of like 60 or so, so that's good progress I think. It's just a simple top-down puzzle game. I'll tell you guys more about it once I've made further progress.
I hope 2021 was a good year for you all, and if not, I hope 2022 will be better for you!

Hello again everybody! Been a while since the last news post, so I figured I'd do just another quick update
Like I said, there isn't a comic coming today. There is no real-life reason for this, I just figured I would take a break since I just got done with Shogi's storyline. I hope you all enjoyed it! It definitely lasted quite a while (4 months!). To tie you over, I have made a character card for Shogi! Feel free to check it out.

Just a quick warning - October is gonna be a bumpy month for me. I just have a bunch of family-friends-work-etc events I have to attend to. There'll probably be a small hiatus coming up, but I'll be sure to let you know.

One more thing that I've been meaning to talk about: since my last news post, I've gotten a whole TWO followers! WOWZA! Big thanks to both murid aka Occasionally, content, an extremely talented artist, and saint-images, a blogger/photographer. Sorry for not thanking you sooner, it really means a lot to me. I'll add their buttons to the bottom of my page
Thanks for all the support from all my readers, and I'll see you later!

Alright, update time once again. Let's do this.
First off, I mentioned yesterday in the profile comments that I didn't do a double release of Clark-Gibson The reason for that is simply because I didn't realize the last Saturday was this week. Oops. To (somewhat) make up for this, I plan on making the next comic a special 8-panel one.

In more real-life news, I've been busy these past weeks trying to find a job. I just graduated, so it's expected. And finally, after a bit of a lengthy search and hiring process, I got one! Hurray!
Keep in mind that a job is DEFINITELY going to affect my schedule, but I'm not fully sure yet, so I'll let you know.

In the previous news post, I mentioned some plans I had that, uh, haven't really come to fruition yet. Mostly because I haven't worked on them much. The Shield Redux anniversary update I've done just an tiny bit for (so it may not be an "anniversary" update anymore, since that would be this Wednesday), and I kinda lost a bit of interest on the article I had an idea for. I don't considered either of these cancelled, though. I might even do that article in the next few days.
Regardless, thanks for sticking with me, and I wish you all a wonderful day.

It's been a while. Senior year had put a lot of things on my plate, but now that plate has been (somewhat) cleaned. Also, I meant to update this yesterday, but I had a weird issue with my firewall that blocked Neocities sites, but that should be fixed now.
Anyways, if you noticed there's a new Clark-Gibson out today, and I will be returning to the normal schedule for the time being. In addition, I updated Cutlass's character card to be a little bit closer to what I want the character to be, and I added her to the possible header images.
As for what I have planned for the future:

Clark-Gibson
- Just continue making the comic. I do have another storyline coming real soon.
Shield Redux
- I want to release an anniversary update for Shield Redux. I want it to be BIG, but I can't guarantee.
Other Section
- I have a new "article" in the works for the Other section. Not sure when I plan on finishing it, though.
Misc.
- I do want to be a little more involved in Neocities. I might try to find ways to reach out to others.

One last reminder: like I said earlier, I just graduated college, so I'm kind of in a transitional period in my life. I don't know if I will be able to continue with everything like I planned. Things can come to a screeching halt very quickly, so be on your toes. For the time being, consider me back.
Once again, I thank you for your patience. I know I'm not really the most popular on Neocities, and that these might not even be read by most, but I sincerely thank those who do follow my little creative endeavors.

Hello again folks! I apologize if you were here expecting a new comic issue, but I have some other news to give instead.
The final semester of college has started for me, and as such, my workload has increased. Due to this, I am probably not going to be able to keep up with my schedule.
However, this time will be a little different! Instead of just falling off the face of the Earth and not doing anything, I'm going to try to still do comics, but on an unset schedule.
Basically, Clark-Gibson will be on a semi-hiatus, and comics will be out whenever they're done, so keep your eyes peeled!
Expect the semi-hiatus to end sometime in early May, when I graduate.

Luckily, I didn't leave you guys entirely empty-handed! If you haven't noticed yet, there's a new character card for our friend, Cutlass.
Speaking of Cutlass, I hope you guys enjoyed her introduction story! It's the first of (hopefully) many continuous stories I wish to do for the comic.
Funnily enough, the story was just going to be about Clark getting smashed by a demon, but I added Cutlass in as a sort of "twist"! As such, things weren't entirely planned out.
There were a few errors I made, biggest one being that Gibson's door was magically put together after Cutlass sliced it. Woops! To remedy this, I have actually re-released some of the pages with errors fixed.
Anyways, thank you so much for your time and patience, and I'll see you later!

I wasn't really planning for this, but I have just completed my first little article thingy for my Other section!
It was kind of a spur-of-the-moment thing, but I did it! I just decided to write about some video games that I've been invested in for long periods of time.
Yeah, so I hope you enjoy reading it. Also, remember that there's TWO (2) Clark-Gibson comics coming out on Saturday, one that continues the current story, and a holiday one!
Thanks for listening!

The Winter Update for Shield Redux has been released! You can visit the itch.io page to download the newest version.
I didn't add too much to it, just a new winter-themed map and a Christmas-themed skin.
The map doesn't add any new gimmicks, but the appearance of the trees and the snowman will change depending on the date. Even the ghost will have a new look!
I hope you all enjoy it!

I'm back, hooray!
Clark-Gibson #15 out now! I will probably continue the regular schedule, at least until February when school starts up again.
I have also begun working on the Shield Redux holiday update, so stay tuned for that too!
Thank you everyone for your patience!

So, it's been two months. Where are you Bloktic?
Well, simply put, I was going to start updating at the end of this week, but as it turns out, finals week is next week!
This means that I will be back next week, with the continuation of a new Clark-Gibson on Saturday, December 12th! Just who sliced down Gibson's door, and why?
Also, I have ideas for a Christmas/Winter-themed update for Shield Redux, so I'll probably start working on that soon too.
Take care everyone, and I'll see you in a bit!